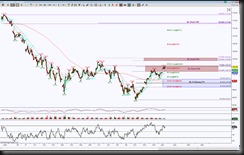 IWM, the ETF for Russell 2000, is swimming in the initial Shark PRZ (Potential Reversal Zone), out of an hour chart's three potential Sharks.

These are Bearish Shark patterns offering the sellers an opportunity to step in for the retracement mode.  Either a breach of 102.22 to test 102.66 then fall back below 102.22 or break down and hold below 100.73 increases the retrace mode scenario and has the initial target of 98.71 and ideal targets at 97.69 for the Bullish 5-0, or 93.37 for the dreamed of 100% retracement of this initial Shark.

Now the 5-0 PRZ offers an opportunity for those buyers that pushed price up to the Shark PRZ's, to step back in in an attempt to test the higher Shark targets.  Once price can hold above 104.23 with conviction, the probability increases to test 113.35.

Keep an eye on the 100.73, the lower portion of the current PRZ, because if price cannot hold below it, this chart's bias is to the upside implying a test of higher PRZ targets, increasing in that scenario with a hold above 102.22.

An important resistance test of 104.23 is at an interesting juncture since it will be the first time in February that a dominate swing point is taken out, I'm referring to that 103.16 point.  It's interesting because if this extended Shark begins a respectable retracement, it'll pull price back below 103.16 and I'll be looking for that 50% retracement for another 5-0 scenario.  However if the taking out of the swing point trumps the bearish Shark, then this PRZ between 103.56 and 104.23 was merely a means to an end, in other words, upside scaling points in route to the larger shark at 113.35.